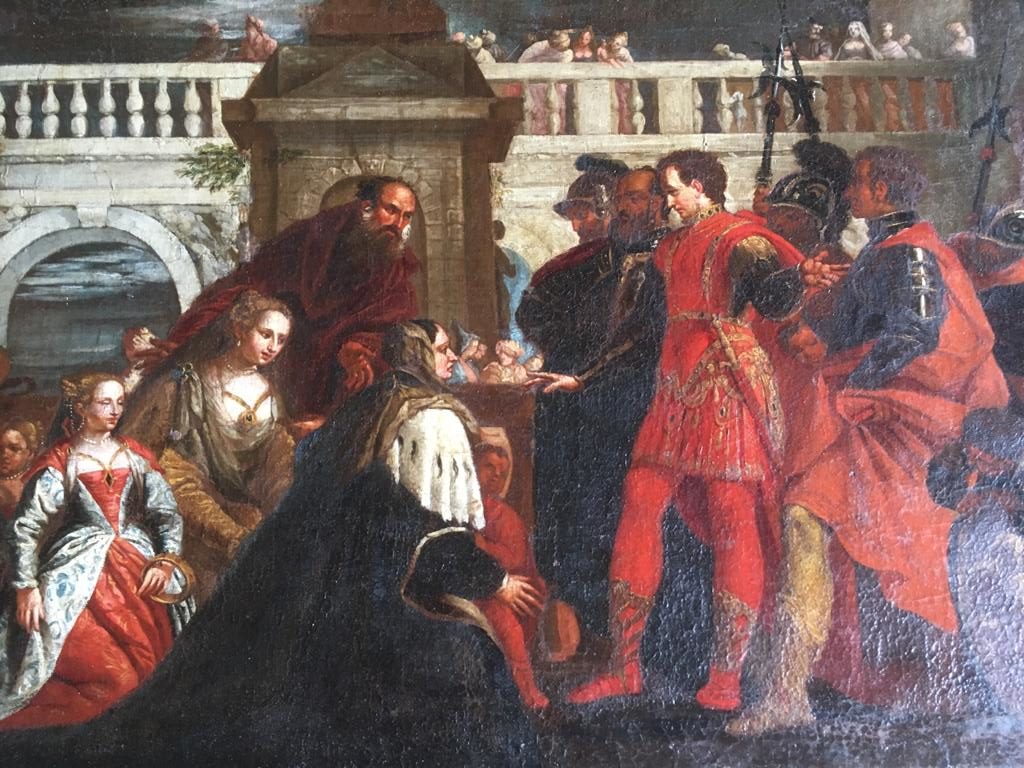 Alexander and the Darius’ family

At first there was only this old canvas, bought for a few hundred euros at a French small-town auction; its chipped surface was soiled by varnish, stung by insects and eaten away by mould and it only hinted at an unidentifiable mythological scene in an architecture of porticoes overhung by a wet sky; in all likelihood it was one of those numerous Venetian canvases made for wealthy travellers of the grand tour between the 18th and 19th centuries …

The doubt arose when its frame of gilded wood fell apart and discovered, glued to the back, the label of a London auction house dated 1807 and attributing the work to the great Veronese.  Even if historical designations are often too flattering to be true and should be taken with a pinch of salt, the matter was turning more serious, and the painting was now deserving to be sent to a restorer. The filthy canvas was therefore cleaned, restored and re-lined; it then revealed its original Venetian aquatic glow and turned out to be an early 17th century version of Alexander taking under his protection, the family of Darius, from the workshop of Veronese.

These versions were not uncommon: around 1620, the agents of Queen Christine had attempted to acquire for the Swedish sovereign the original painting by Paul Veronese then on display in the Pisani-Moretta palace in Venice.  For the mighty sum of 500 ducats requested by the owner, the operation was not carried out, but had triggered at the workshop of Veronese, a wave of orders of versions of all sizes of this original monumental work. The painting at Villa Cosmiana is one of them.

As always with Veronese, the edifying scene which portraits the clemency of the victorious king of the Greeks towards the family of the defeated king of Persia, is only a pretext to deploy shimmering silks in a classic stone arches décor lit by the crisp navy, emerald light which is the genius of Venetian painting. The hieratic figures, draped in incandescent red for a princely Alexander and in midnight blue for an imploring Stateira, are posed motionless like the pieces of a chessboard in this timeless maze of porticoes. A general impression of beauty, grandeur, luxury, set in for eternity and which is now the pride of the Villa Cosmiana collection.